The challenge of Old Man’s Cave 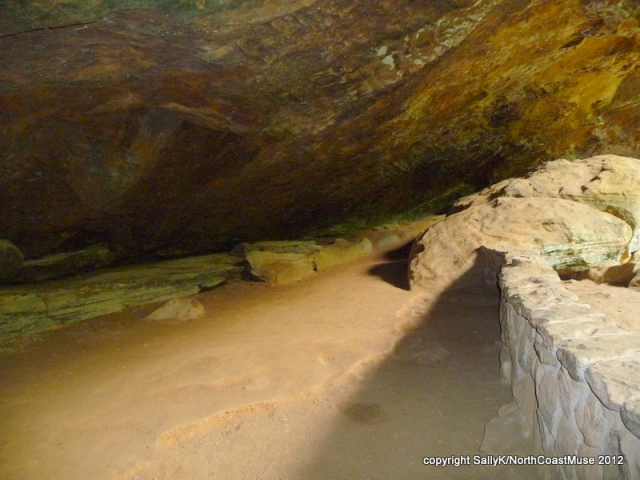 If you’ve been to Old Man’s Cave, you’re probably saying, huh?  It’s not a challenging hike.  And I agree, the hike to the cave is not bad.  HOWEVER, until the end of October, 2012, the biggest challenge in the Hocking Hills is dodging the construction at the visitor’s center and entrance to the Old Man’s Cave Trailhead.

We went there twice – once to just get info and once to take the trail.  It’s downright scary,  dodging the heavy equipment rumbling over the grounds.  From the look of things, I would say that October end date is optimistic.  Old Man’s Cave is not a very long hike, and we could hear the equipment growling and beeping along the whole walk.  If you want peace and quiet in the woods, take a different trail.  At least for a couple of months.

One of the most interesting things about this trail is the human development along it.    The  State of Ohio has owned this area since 1924.  The ODNR and Ohio Division of Parks have controlled it since 1949.  It is the most visited spot in the area.  In 1998 many of the bridges and trails were washed out in a flash flood and were rebuilt.  It still looks somewhat rustic, but developed for ease of foot travel to the cave.

All the articles you read on-line talk about rushing waterfalls falling over the three levels of gorges but there was barely a trickle in early September, mostly dry due to this summer’s drought.  This is interesting because you can get closer to some walls and see what was the bottom of the streams.  It changes the face of the gorges and cave but does not diminish their beauty and wonder.

Why is it called “Old Man’s Cave?”  From the Hocking Hills Visitors Guide:

Old Man’s Cave is a well-known name in the Hocking Hills of southeastern Ohio. A favorite hiking destination, Old Man’s Cave Ohio is arguably the most popular of the six areas at Hocking Hills State Park. A mile-long gorge at Old Man’s Cave displays a variety of geologic features, including waterfalls, sandstone cliffs and rock formations with names like the Devil’s Bathtub, Sphinx Head, Eagle Rock and Whale in the Wall. Old Man’s Cave is also home to the 149-foot-tall hemlock that’s said to be the tallest tree in Ohio. The name Old Man’s Cave refers to the rock shelter that was once the home of Richard Rowe, a 19th-century hermit who is said to be buried beneath a cave ledge on the premises.

The Rowe family lived in the Cumberland Mountains in eastern Tennessee , before beginning their journey to theHocking Hills State Park area.  The older of their two sons was named David. Their younger son was born about 1784. His name was Richard Henry. Mrs. Rowe died in 1796.

The father migrated up through Kentucky with his two sons to the banks of the Ohio River . There he set up a trading post. The elder son grew up to become a freighter pilot on the Ohio River . Richard worked in his father’s business until about 1810. For a couple of years, he traveled the Ohio and Scioto Rivers , observing the workings of the War of 1812. Afterwards, he became a recluse, preferring to live alone in the forest.

In due time, David Rowe married an Indian woman, probably Shawnee . David and his wife migrated to the Great Lakes, and then to the Black Hills in South Dakota .

Richard made several autumn trips to the Old Man’s Cave gorge in what would become Hocking Hills State Park , where he would stay for the trapping season. Laden with prime pelts, he would return in the spring to his father’s trading post on the Ohio River . His favorite route was to follow Salt Creek, which he called ” Clearwater ,” to theScioto River . He then followed that stream southward to the Ohio River .

There came a time when Richard was missing from the area for about three years, and was presumed to be dead. He returned, however, and told his acquaintances that he had gone to visit his brother. He had walked to the Ozarks, and then found that his brother was no longer living, and his widow had no means of support. Richard told of having a stash of money back home in the “gorge.” He promised to return to the Ozarks to give that money to David’s widow.

One day after returning home, Richard had gone to the stream in the gorge to get his supply of water. As he had done many times in winters past, he used the butt of his musket to break the ice. The weapon discharged, with the muzzle pointing under his chin. A few days later, he was found by a couple of other trappers. They wrapped his body in the bark of an oak tree, and buried him with all the ceremony the wilderness could provide, in the sand on a ledge in his beloved Old Man’s Cave gorge. There is no one living today who knows the location of his final resting place.

A few months later, an Indian from the Black Hills came to the area. In talking to a trapper who knew the HockingHills State Park area, he inquired about a place called ” Clearwater ” and further asked the trapper if he knew of a man by the name of Richard Rowe. He was directed to the Cedar Falls – Old Man’s Cave area. In about two weeks, the Indian returned to the trapper’s home, and related the following story:

“Richard Rowe came to visit us in the Black Hills . He said he had a stash of money, which he would bring to us. Fearing that foul play had overtaken my friend and relative, I came looking for him. There is much danger between here and the Black Hills . I will return now to my people.” The Indian gave his name as “Oblivious Tarrow-he.” (At this point, he walks off the pages of history, and we know nothing more about him.) His visit was in 1857, so Richard Rowe lived to be about 74 years of age.

In the years to follow, the pioneers in the area often avoided the Old Man’s Cave gorge. To keep their children from playing on the dangerous ledges and cliffs that are found in Hocking Hills State Park , they would tell them ghost stories about these Ohio trails. “Don’t go there. That’s where the old man died.” Or “That’s where the old man shot himself.” Or “The old man’s ghost roams the bottom of the (Old Man’s Cave) gorge.” In time, it became known as “The Old Man’s Gorge” but today, it is known far and wide as “Old Man’s Cave.” It is the best known of the HockingHills State Park areas.

We did not see Richard’s ghost on our visit.  He’s probably hiding until the construction is over.

There are lots of resources on line describing the cave’s environment and history.  I suggest visiting the Hocking Hills Visitors Guide-Old Man’s Cave  and also an overview on TrekOhio.com.  Here is a photo diary of our hike.  You can pause and resume as needed.

A little blog about the ordinary and not so ordinary things our family does, places we travel, things we see. Like travel, cooking, family stories, book reviews, music? You will find it all here - comments welcome!
View all posts by SallyK →
This entry was posted in Environment, Hiking, Nature, Ohio, photography, Summer, Travel and tagged caves, hiking, Hocking Hills, Logan County, Nature, Ohio, Old Man's Cave, photography, Travel. Bookmark the permalink.

7 Responses to The challenge of Old Man’s Cave